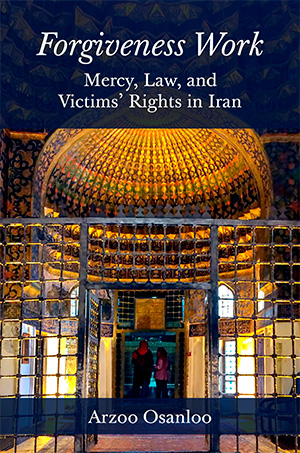 Iran's criminal courts are notorious for meting out severe sentences—according to Amnesty International, the country has the world’s highest rate of capital punishment per capita. Less known to outside observers, however, is the Iranian criminal code’s recognition of forgiveness, where victims of violent crimes, or the families of murder victims, can request the state to forgo punishing the criminal. Forgiveness Work shows that in the Iranian justice system, forbearance is as much a right of victims as retribution. Drawing on extended interviews and first-hand observations of more than eighty murder trials, Arzoo Osanloo explores why some families of victims forgive perpetrators and how a wide array of individuals contribute to the fraught business of negotiating reconciliation.

Based on Qur'anic principles, Iran's criminal codes encourage mercy and compel judicial officials to help parties reach a settlement. As no formal regulations exist to guide those involved, an informal cottage industry has grown around forgiveness advocacy. Interested parties—including attorneys, judges, social workers, the families of victims and perpetrators, and even performing artists—intervene in cases, drawing from such sources as scripture, ritual, and art to stir feelings of forgiveness. These actors forge new and sometimes conflicting strategies to secure forbearance, and some aim to reform social attitudes and laws on capital punishment.

Forgiveness Work examines how an Islamic victim-centered approach to justice sheds light on the conditions of mercy.

The Politics of Women's Rights in Iran

In The Politics of Women's Rights in Iran, Arzoo Osanloo explores how Iranian women understand their rights. After the 1979 revolution, Iranian leaders transformed the state into an Islamic republic. At that time, the country's leaders used a renewed discourse of women's rights to symbolize a shift away from the excesses of Western liberalism. Osanloo reveals that the postrevolutionary republic blended practices of a liberal republic with Islamic principles of equality. Her ethnographic study illustrates how women's claims of rights emerge from a hybrid discourse that draws on both liberal individualism and Islamic ideals.

Osanloo takes the reader on a journey through numerous sites where rights are being produced—including Qur'anic reading groups, Tehran's family court, and law offices—as she sheds light on the fluid and constructed nature of women's perceptions of rights. In doing so, Osanloo unravels simplistic dichotomies between so-called liberal, universal rights and insular, local culture. The Politics of Women's Rights in Iran casts light on a contemporary non-Western understanding of the meaning behind liberal rights, and raises questions about the misunderstood relationship between modernity and Islam.

“The Law Knows No Shame: On Robert Redfield's 'Primitive Law' and the Persistence of Honor in Contemporary Societies”

“On Not Saving the Muslim Women (and Men)”

“When Blood Has Spilled: Gender, Honor, and Compensation in Iranian Criminal Sanctioning”

“Whence the Law: Politics of ‘Women's Rights,’ Regime Change and the Vestiges of Reform in the Islamic Republic of Iran”

“The Measure of Mercy: Islamic Justice, Sovereign Power, and Human Rights in Iran”

“Doing the ‘Rights’ Thing: Methods and Challenges of Fieldwork in Iran”

“Subjecting the State to Seeing: Charity, Security, and the Dispossessed in Iran's Islamic Republic”

“Crime and Reconciliation: Women's Peace Initiatives in the Islamic Republic of Iran”

“From Status to Rights: The Shifting Dimensions of Women's Affairs and Family Law in Iran”

“Human Rights by Any Other Name”

(Blood Has Spilled: A Gendered Analysis of Crime and Punishment in Iran) S. Shahshahani, trans. Farhang va Ensan (Culture and Being), Tehran, Iran, 5(2): 103-122.

“Refusing Mercy: The Hunger Strike Controversy as a Challenge to the State's Monopoly on Violence in Iran”

“Lessons from the Suffrage Movement in Iran”

“Redress: Rights and Other Remedies, A Comment on David Engel's Article on Rights Consciousness”

Islam and the Rule of Justice: Image and Reality in Muslim Law and Culture.

China and Islam: The Prophet, the Party, and the Law.

Women in the Mosque: A History of Legal Thought and Social Practice.

“Improving the Status of Women: An Interview with Arzoo Osanloo”

“Methods as Politics and the Anthropology of Change in Iran”

Read
Advisory on the

“Postscript to ‘When Blood Has Spilled: Gender, Honor, and Compensation in Iranian Criminal Sanctioning’”

“Interview with Arzoo Osanloo about ‘The Measure of Mercy.’”